Many people associate Hot Cross Buns with Easter, but this spiced and sweetened roll also makes a delicious addition to any meal, any time of the year. Combining warm spices, zesty citrus and ginger, and a hint of sweetness, they go equally well with a classic afternoon tea as they do a hearty breakfast or a multi-course dinner. Light-coloured and just right for baking, the subtle notes of caramel and moist texture make it ideal for allowing delicate flavours to shine through in your creations. 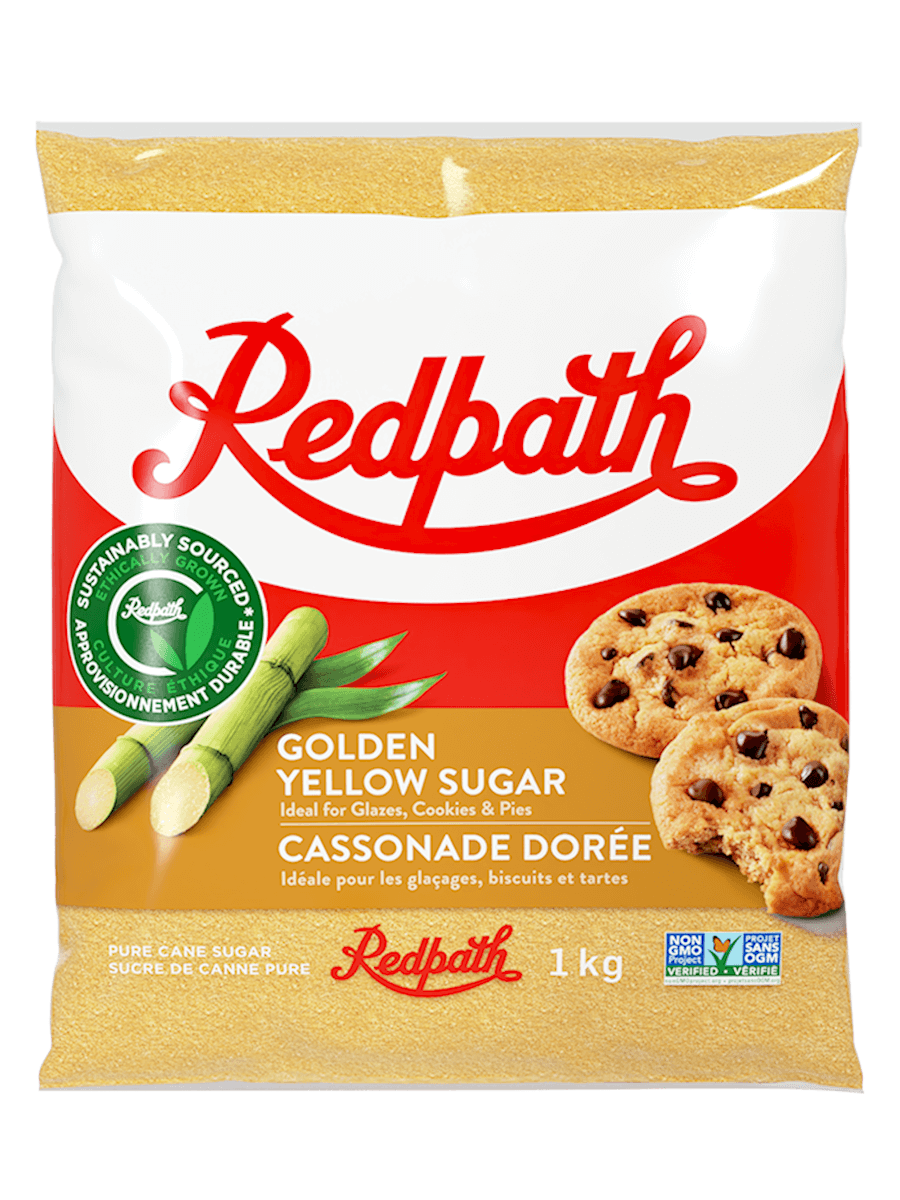 Use it to make the smoothest frostings, icings, and glazes you’ve ever seen for the finishing touch on your cakes, cupcakes, and more. 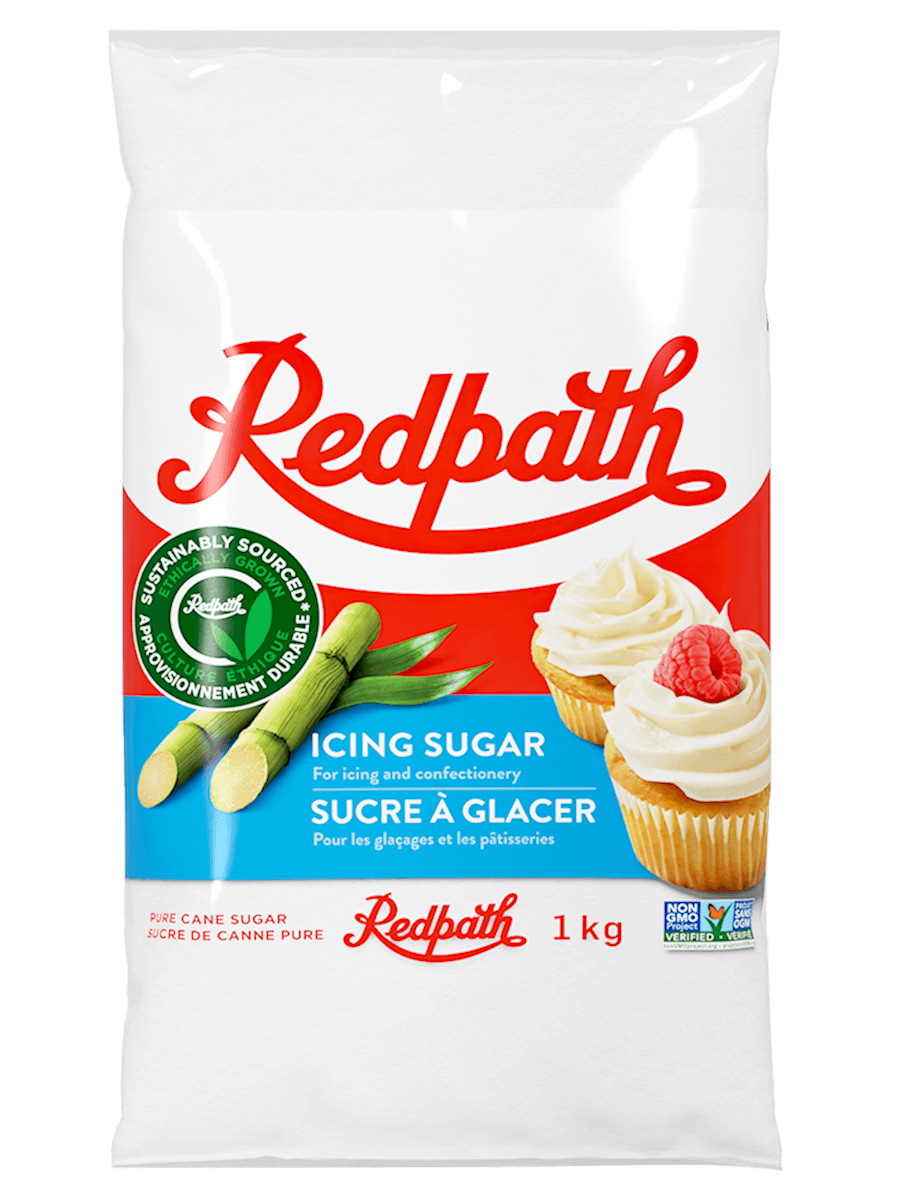 In a small bowl, add raisins and rum. Stir to coat evenly. Add the boiling water to the bowl. Cover and allow raisins to soak and plump up; 15 minutes.

Pour raisins and liquid into a sieve to separate them. Gently press down on the raisins to strain out as much liquid as possible. Reserve the soaking liquid.

In a large bowl, whisk together 3 cups (360 grams) of bread flour with the ground cinnamon, salt, cloves, and nutmeg until well combined. Set aside.

Place warm milk in the bowl of a stand mixer. Sprinkle the yeast over the surface and gently stir. Let stand and allow the yeast to proof; 10 minutes. The mixture should be puffy (see Chef’s Tips).

Place bowl into the stand mixer fitted with the hook attachment. Add 1 cup of the flour mixture, mixing well on low speed. Add in the strained raisins and candied ginger. Add the remaining flour mixture 1 cup at a time, mixing well after each addition. Knead for 5 minutes. If after 5 minutes the dough is still wet and sticky and not pulling away from the side of the bowl, add in additional bread flour about ¼ cup at a time until dough just begins pulling away from the sides. Continue to knead dough until it forms a soft, smooth, supple ball of dough that holds its shape when held in the palm of your hand; 10 to 15 minutes.

Place the dough into a large, lightly greased bowl and cover with plastic wrap or a clean, damp, lint-free kitchen towel. Let stand in a warm, draft-free location until doubled in size; 45 minutes to an hour.

Lightly grease and line a 9 x 13-inch baking pan with parchment paper, leaving a 2-inch overhang on the longer sides.

If using a scale, weigh the dough and divide by 12. Each ball of dough should weigh approximately 90 grams. If a scale is not available, gently roll the dough into an even log. With a bench scraper or sharp chef’s knife, cut into 12 equal-sized pieces. Round and shape each piece of dough to form a smooth ball. Evenly arrange the rounded dough balls in the prepared baking pan into 3 rows of 4.

Cover the pan loosely with the plastic wrap or damp kitchen towel and place in a warm, draft-free location until the balls of dough are puffy and touching one another; about 45 minutes to 1 hour.

About 15 to 20 minutes into the proofing time, preheat oven to 350°F (177°C) to ensure the oven is ready when the buns have finished proofing.

In a small bowl, whisk together flour and the Redpath® Icing Sugar until well blended. With a small spatula, stir in the water and vanilla extract until a thick but runny paste forms. Transfer the paste into a piping bag fitted with a small round/plain tip (see Chef’s Tips).

When buns are proofed and ready to be baked, slowly and evenly pipe the paste mixture down the centre of the buns lengthwise (x 3). Repeat the procedure crosswise (x 4), forming a “+” on each bun.

Place buns into the preheated oven and bake for 25 to 30 minutes, or until deep golden brown and/or a thermometer inserted in the center of a center roll registers 190°F (88°C).

Remove from oven and place pan onto a wire cooling rack while making the glaze.

In a small saucepan, combine the Redpath® Golden Yellow Sugar with ¼ cup (63 ml) of the reserved liquid from soaking the raisins (see Chef’s Tips). Place over medium heat and bring to a simmer. Stir until sugar has completely dissolved. Remove from heat.

With the help of the parchment paper overhangs, carefully lift the buns out of the pan and onto the wire cooling rack.

With a pastry brush, brush the glaze over the entire surface of the warm buns using up all the glaze.

Best served warm and/or eaten the day of. 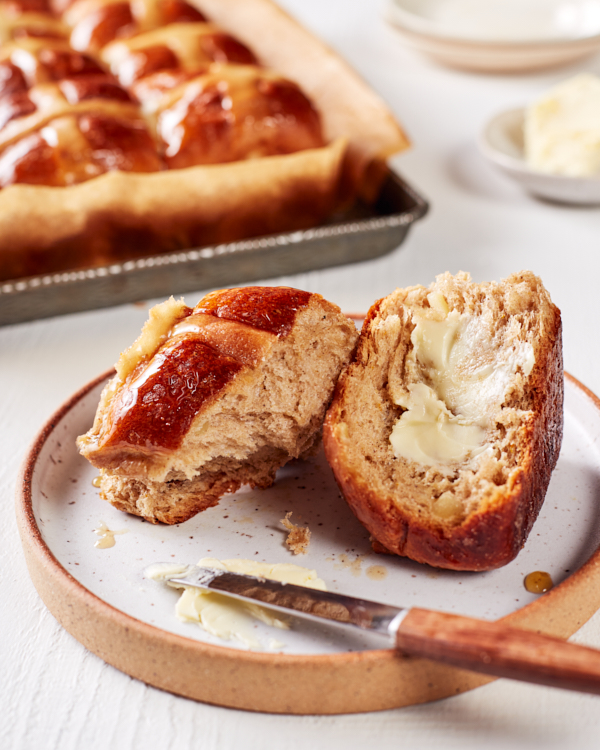 *Ensure ingredients are at room temperature or slightly warmer before proceeding with the recipe.

*Ensure that the liquid used, in this case, milk, does not exceed 120°F (49°C) or is ice cold as this will kill the yeast. If after proofing, the mixture has not bubbled or become foamy, the yeast is likely dead. Start over using fresh yeast.

*If a piping bag is not available, transfer paste into a resealable bag and snip off the corner when ready to pipe the crosses onto the buns.

*Rum can be substituted with brandy, whisky, or bourbon. Alternatively, for an alcohol-free version, replace the rum with apple or orange juice, or use one tablespoon of vanilla extract and substitute the remaining 2 tablespoons with hot water.

*Redpath® Dark Brown Sugar can be substituted for the Redpath® Golden Yellow Sugar; doing so may impart a subtle caramel flavour to the buns and a darker colour to the crust of the buns and the glaze.

*Any leftover buns should be completely cooled before placing them into an airtight container or resealable bag and storing at room temperature for up to 3 days. Reheat buns in the microwave at 10-second intervals until warmed through. Alternatively, slice buns in half, toast in a pan or oven, and top with butter or jam. Buns can also be frozen for longer storage (up to 6 months). Defrost overnight in the fridge and place buns, covered in foil, in a preheated 325°F (163°C) oven for approximately 5 to 8 minutes, or until warmed through.

This site uses web beacons and cookies to ensure we can give you the best experience on this site. To learn more, read our privacy policy. By accepting this message you are agreeing to the use of cookies throughout the site.